Skip to content
Home / mySELF / Sadie is Divorced AND Happy

Sadie is Divorced AND Happy 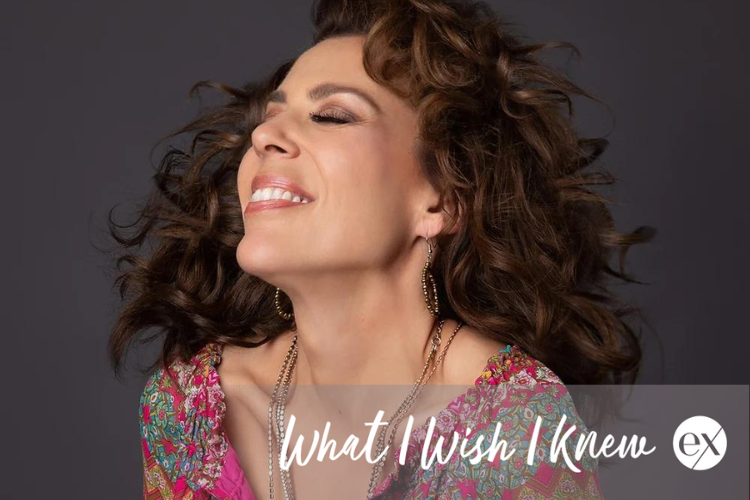 Sadie Marie went through a divorce about four years ago, and like so many people, the end of her marriage led to the beginning of her freedom. Quite literally the day her divorce papers came in the mail was when she says her honeymoon stage began. She embraced new opportunities and gave herself the space and freedom to become the spicy gal she is today. And that’s what led to her creating and hosting Sadie’s Divorced and Happy podcast. She spoke to Jessica and T.H. for the Divorce etc… podcast about how she’s spicing her life up and embracing her sensuality post-divorce.

While Sadie is a force of energy and an uplifting spirit, she’s endured some rough patches in the process. It can happen to anyone. The grief of divorce can hit you at any time, even 14 years later, as Jessica and T.H. often say. For Sadie, she thought she was doing well, and then suddenly, after four years of being divorced, it hit her.

Sadie went into the summer of 2022 with the expectation of having a “hot girl summer”. “I thought I was going to do all these fun things and be extra playful and enjoy a lot of time exploring my own city,” Sadie had assumed, but that was not the case. Two of her best friends moved out of state a couple of months prior. Then, her photography mentor of 15 years retired and moved out of state. And to top it all off, the relationship she was in ended. “I just had so much loss this summer,” Sadie reflects. “That loss just triggered a ton of grief, just so much grief.”

Her typical strategy, which might even be yours, is to stay busy to avoid the pain. But this period threw her for a loop because she was so overwhelmed by the grief that she couldn’t even bring herself to motivate and keep busy, which in turn just made it all worse. Sadie finally leaned into it, realizing that she had been resisting her feelings – around her divorce, her childhood, and even around patterns of behavior. She had to really let herself sink into it all and accept it while forgiving herself.

So how do you get through something like that? Sadie admits “the getting through is just the allowing of the discomfort.”

It sucks, yeah. But sitting in that discomfort, identifying your feelings, working through it, and accepting who you are is what helps to get over that one last obstacle and turn the corner to the light at the end of the tunnel. Listening to your mind and your body is key.

One trick Saide learned from her therapist was to start talking to her body. Talking to herself as if she’s her own friend. Have you ever tried doing this? Sadie explains that if you talk to your body like she’s her own person, it gives you that space to get out of your own head. Tell her, you are just so strong. I appreciate you. Thanks for being there for me. It might feel a little odd at first, but it’s so important to remember.

When Sadie initially entered her honeymoon stage post-divorce, she realized how much she had missed out on in life. She started a *spicy* journey, exploring her sexuality and all the fun that comes with that. And with her podcast, like Divorce etc… and the exEXPERTS.com website, it’s not about encouraging anyone to get divorced. It’s advocating for people to recognize that they need to do what makes them happy and if they’re finding themself in a shitty divorce situation, we’re all here to tell you, there’s light at the end of that tunnel. She says, “I wanted people to know that after divorce, there was actually a lot of happiness and possibility and positivity and new opportunities.”

Sadie’s podcast covers topics ranging from dating to self-care to sex. “I talk about my sexual renaissance,” says Sadie. “I talk a lot about dating after divorce. I have talked about the topic of happiness and self-care, but yeah, I do enjoy a little out-of-the-box fun.” And she admits to T.H. and Jessica that after her divorce she was surprised to discover how bold she could genuinely be.

“I think before divorce, I never really gave myself permission to be a sexual being, to have topics about sex and pleasure and any of that,” Sadie reflects. But through her podcast, through interviewing various “sex-perts”, it’s opened her eyes to what’s out there and who she could be. She says her podcast is a safe space for that exploration and finding out who you really are.

What She Wishes She Knew

“What I wish I knew prior to divorce is searching for happiness through another person for happiness is never a satisfying journey,” Sadie reflects. “It comes from within.”

It’s a process. It’s not immediate, and it takes work to get there. To quote Liz Gilbert, “Grief is a bill that you have to pay. You don’t have to pay it today, you don’t have to pay it in two years, but you’re going to have to pay it. It’s not going anywhere.” Sadie held onto that and took it to heart. For Sadie, it was a debt paid four years later – and who knows, maybe there will even be more to surface as time goes on. But it’s been a journey that has given her lots to reflect on, which she’s now incorporating into season three of her podcast, for which the theme is “The Comeback”, something we can all relate to. 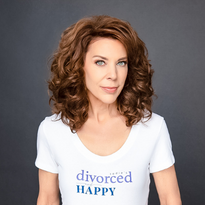 Why We Chose her: Sadie's Divorced and Happy podcast, like our podcast and website, is not about encouraging anyone to get divorced. It’s advocating for people to recognize that they need to do what makes them happy and if they’re finding themself in a shitty divorce situation, she's there to tell you, there’s light at the end of that tunnel. We love that her message is that there can actually be a lot of happiness, possibility, positivity, and new opportunities amid divorce.
One Thing she wants You To Know: Becoming really comfortable with yourself is one of the best gifts your divorce will give you. Grief is daunting but it's also a guide which leads to a much stronger sense of self and comfort with self. 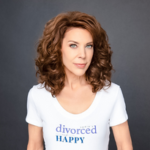